The house in Aegina is organized around a central patio. The dialogue with the natural terrain of the plot as well as the unobstructed visual views of the land were elements crucial to the design. The visitor enters from the highest point of the patio from where the movements are distributed around the three living areas of the house – the master bedroom, the guest rooms and the lounge area – and the swimming pool. The morphology of the patio follows the outer sloping terrain and as it gradually descends through a path of terraces and outdoor seating areas leads the visitor to the view. Its final level, in combination with the airy living room, constitutes an expanded covered balcony to the sea. Its transparent roof bears the pool-observatory. The patio functions as a vital living space of the residence and so does the rooftop swimming pool. The bedrooms maintain their privacy while at the same time referring to the heart of the whole – the patio and the sea view. The section of the house levels creates an internal microcosm of spaces and movements, constituting a path that can bypass the enclosed spaces and end up outside the plot around the side of the daily activities volume. The morphology of the complex expresses the function of each individual space housed under it while the selected rough materials set up a direct dialogue with the island’s topos. The individual volumes are embraced by a dynamic curved, unifying outer skin that holds the whole together and forms a characteristically acute, yet silent gesture of a human intervention on the natural landscape.

The visitor enters the house after descending a few steps and reaching the front door. The door follows the outer skin of the house in morphology and materiality resulting to its “camouflage” so as not to disturb the overall visual aesthetic balance of the outer surface. The resident is now inside the inner atrium where the whole organization of the house is revealed to him / her. The atrium functions as a “panorama” of movements and glances while at the same time it shapes the outdoor life of the house through step-seats and a built-in sitting space. Its organization into levels and corners, flower beds and water elements creates an internal visitor-friendly micro-scale that comes to imitate the island alleys and terraces and to offer interest and reasons to stay in it. Outdoor living acquires equal value with indoor living.

The pool of the house was designed as a visual continuation of the water element of the sea and at the same time as an observatory – “belvedere”. This was achieved by placing it in a receptor tank formed by the roof structure of the living room volume. Thus, its visual continuity-integration with the sea is immediately perceived when entering the highest level of the atrium. The visitor’s vision field “perceives” the water tank as one with the sea. The route towards the pool is made possible through the use of a staircase starting from the entrance level of the patio and leading to the roof of the guest-bedrooms. Then, a connecting slab leads the habitant to the elongated water tank.

The gradual and flowing transition to the second and third level of the atrium signals the possibility to enter the guest-bedrooms and the main master bedroom respectively. Each function is housed under different morphoplastic elements. The common element of both volumes that accommodate the bedrooms is the curvature. The roof of the guest rooms projects as a semicircular cantilever towards the atrium in order to achieve two results: To extend the roof surface of the guest rooms which acts as a seating area for the pool, while this curved extension projects less aggressively towards the atrium and at the same time enriches the vocabulary of islandic forms that are designated to convey the aesthetic vocabulary of the proposal.

The entrance to the guest rooms is made possible through the double puncturing of a concrete breeze block wall bearing plantation and also standing as an element of the night light scenario of the atrium. Each guest room is an independent residential unit. The roof of the rooms recedes in relation to the curvy outer wall, thus forming a single skylight that runs through both bedrooms. This design solution leads to the increase of natural day light reaching the rooms, to the direct visual contact of the inhabitant with the element of the sky and finally to the detachment of the volume housing the rooms from the perimeter wall so that it can be perceived as an independent synthetic element of the solution.

The entrance to the master bedroom is situated on the third level of the atrium. A grand opening on an inclined concrete wall leads to the private functions of the master bedroom, through the descent of a ramp. The wall separates and isolates the private life of the couple from the shared life of the house. The wall formed by exposed reinforced concrete bears a twofold role: it is an element on which the different morphologies of the living room and bedroom volumes “collide”. At the same time the wall acts as a filter of movements and glances from the patio and the living room to the master-bedroom. Its separative role is reflected upon its monolithic morphology and the robustness it exudes. Both the guest houses and the master bedroom offer access to private open spaces overlooking the sea. The curvature of the exterior walls that enclose the whole complex is shaped that way in order to emphasize the “opening” and the reference of the residence towards the sea.

The living room was designed as an elongated space with its long dimension unfolding parallel to the sea view. The absolute transparency provided by the sliding windows that run through the long sides of the living room allows the visitor’s gaze to “penetrate” unhindered from the highest point of the atrium to the sea. The living space is transformed into a frame-pavilion with direct reference to the seafront and the water element. Its division into two levels, corresponding to the living room and the kitchen area, ensures the connection of the latter with the natural ground level in the SE part of the plot. The transparent roof of the living room, which at the same time serves as the bottom of the pool above, contributes to the visual connection of the two elements as well as to the attribution of a surreal atmosphere in this space. The “water” roof generates a unique natural day light that is never constant throughout the passing of hours. The view of the bodies that swim offers a theatricality and a certain flow in a space that aims to the unification of the outside with the inside in every possible way. 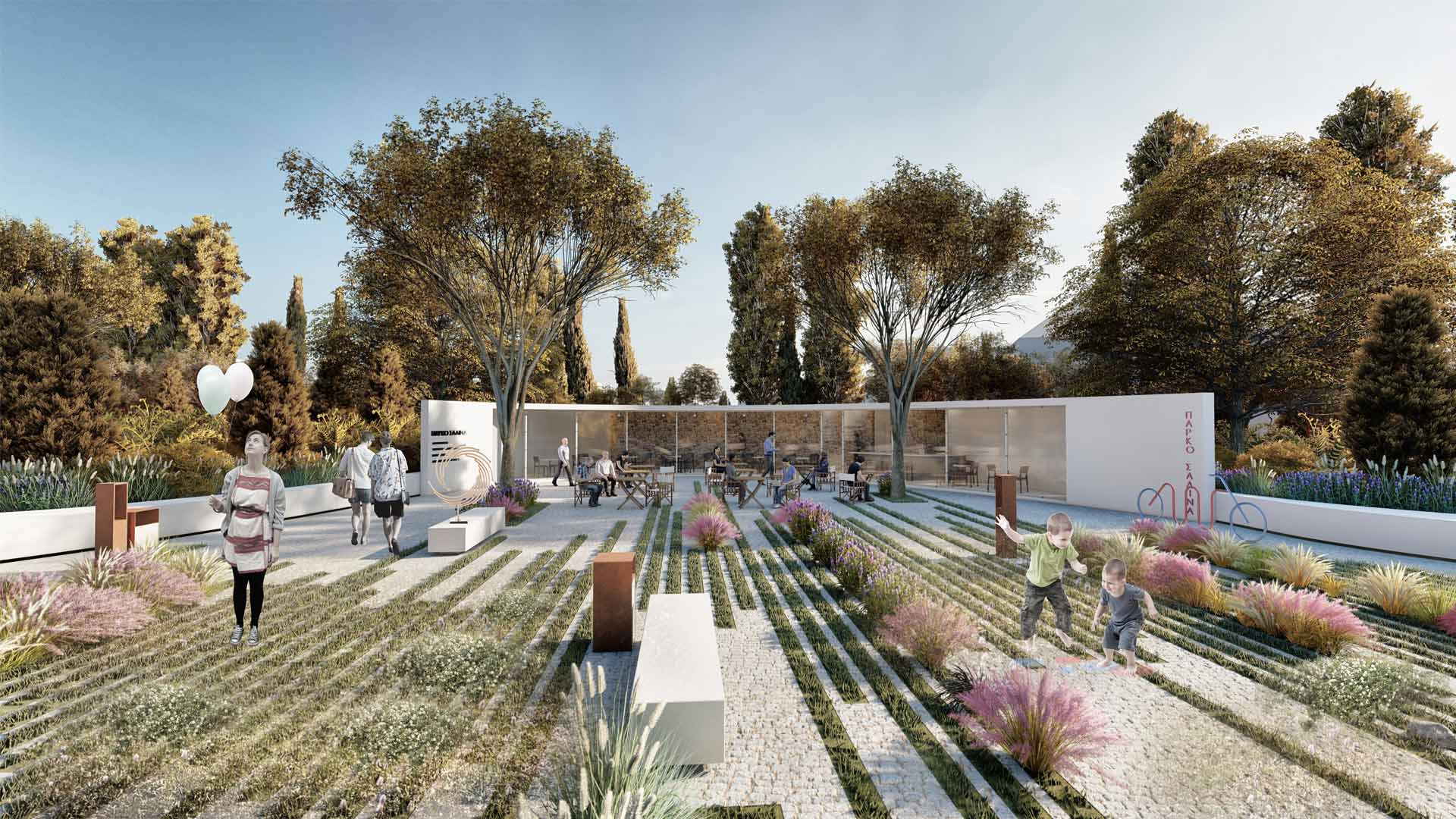 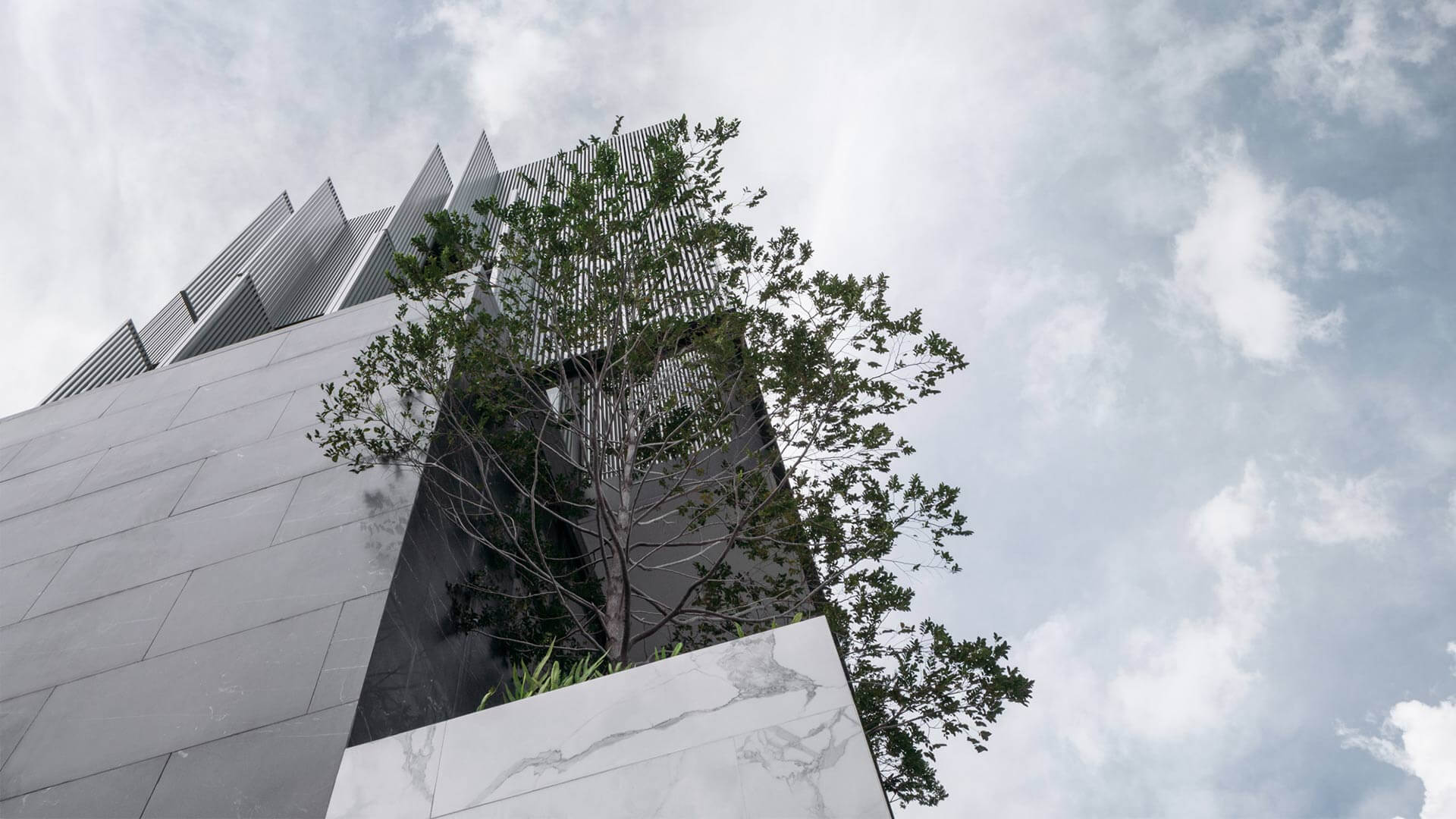 Next-generation housing for the tropics 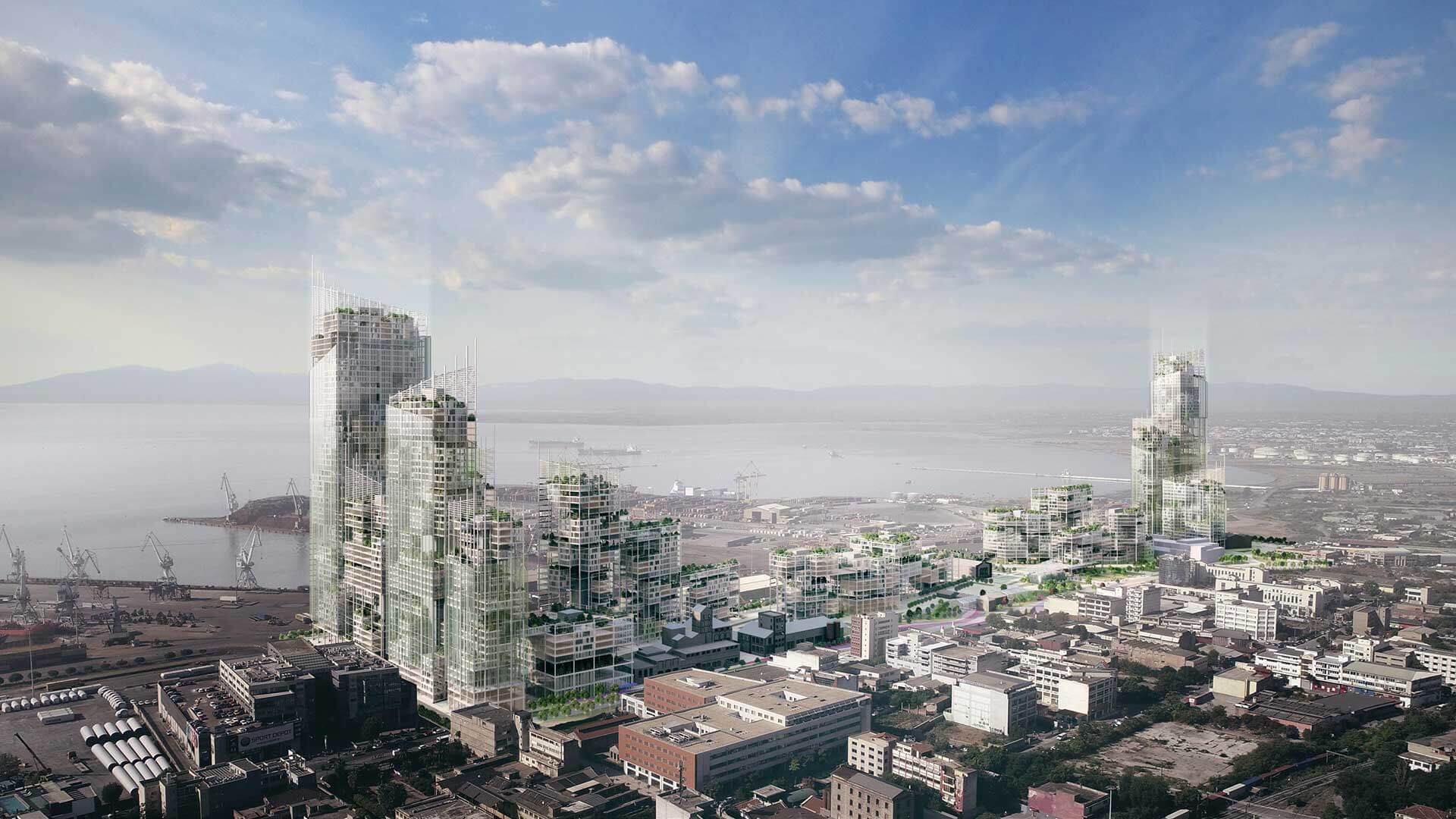 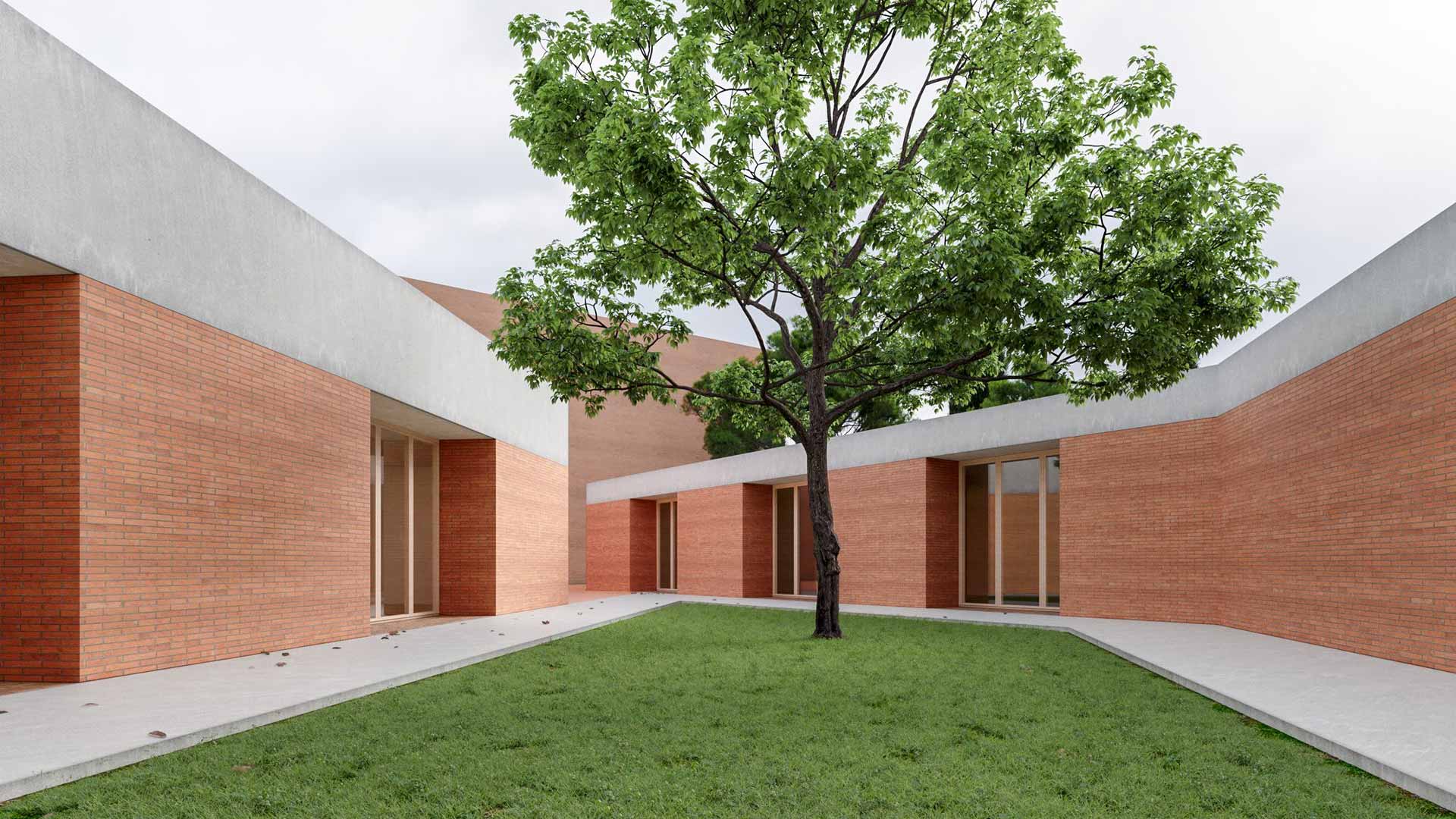 Sports and Civic Center in Gestalgar

A Typology Rooted in Tradition